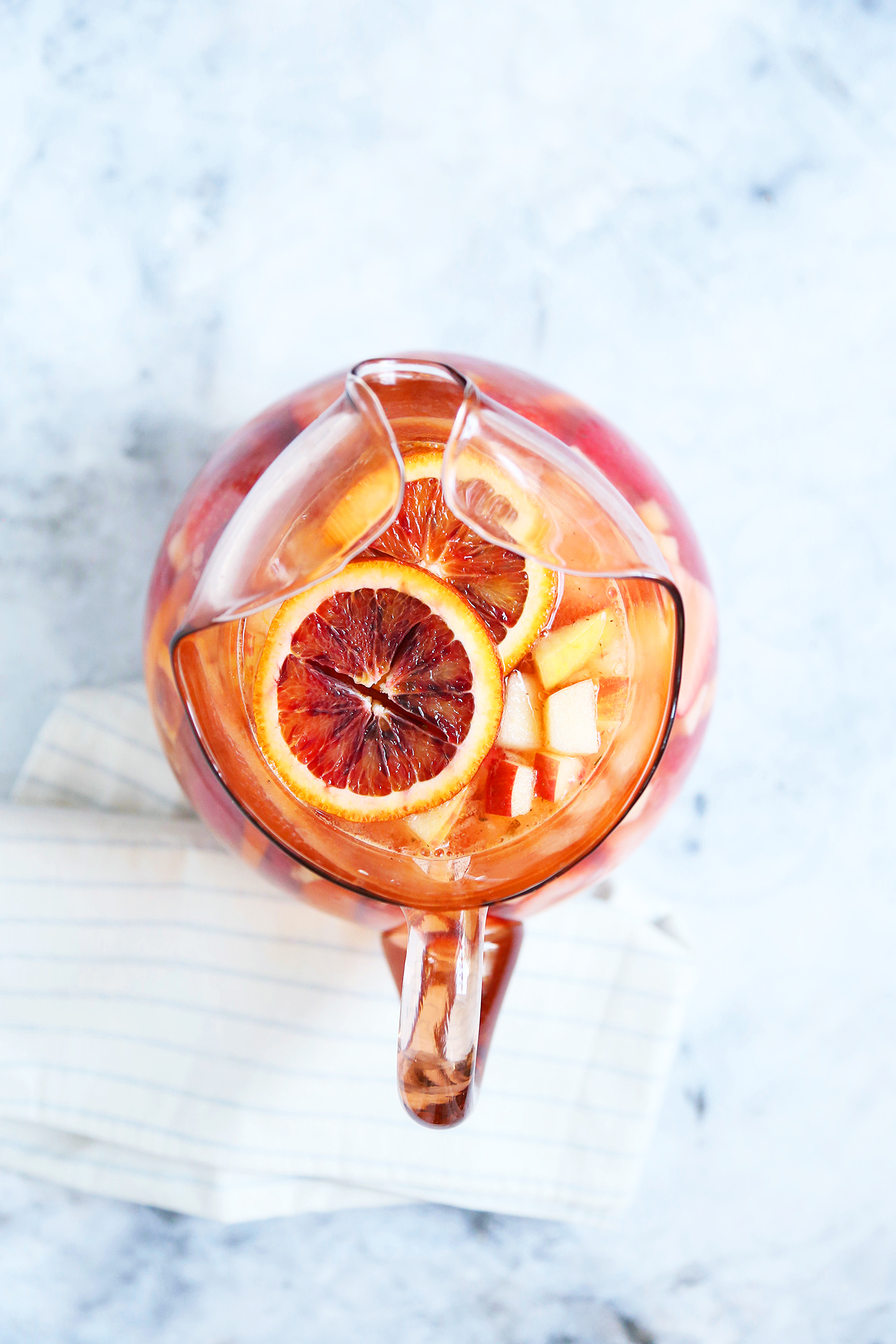 Happy hour time? After a few days with children at Walt Disney World, I’m in need of a drink. TGIF everyone! I found blood oranges at the market and I can’t even contain my excitement. I decided to make this easy Blood Orange Sangria so I can enjoy it over the weekend. If you can get your hands on blood oranges already this would be great to make for an upcoming holiday party or gathering. Large format drinks are perfect for the holiday and entertaining season. 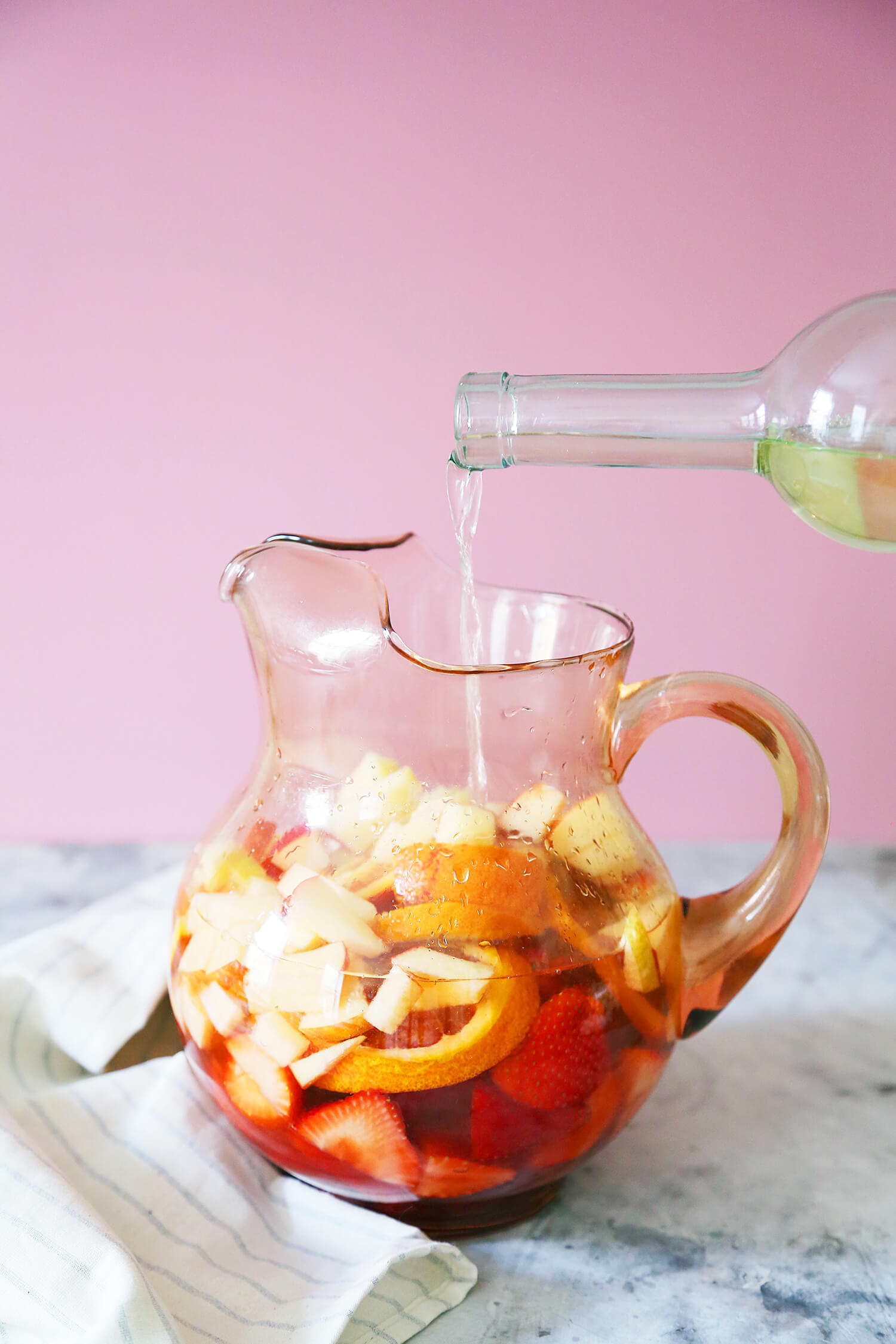 First things first, juice your blood oranges. In a large pitcher combine the wine, apple brandy, campari, blood orange juice, club soda, apples, raspberries, strawberries, and blood oranges. Stir well to combine. Fill your glasses with ice then spoon some fruit from the sangria on top.Pour into each glass and serve. 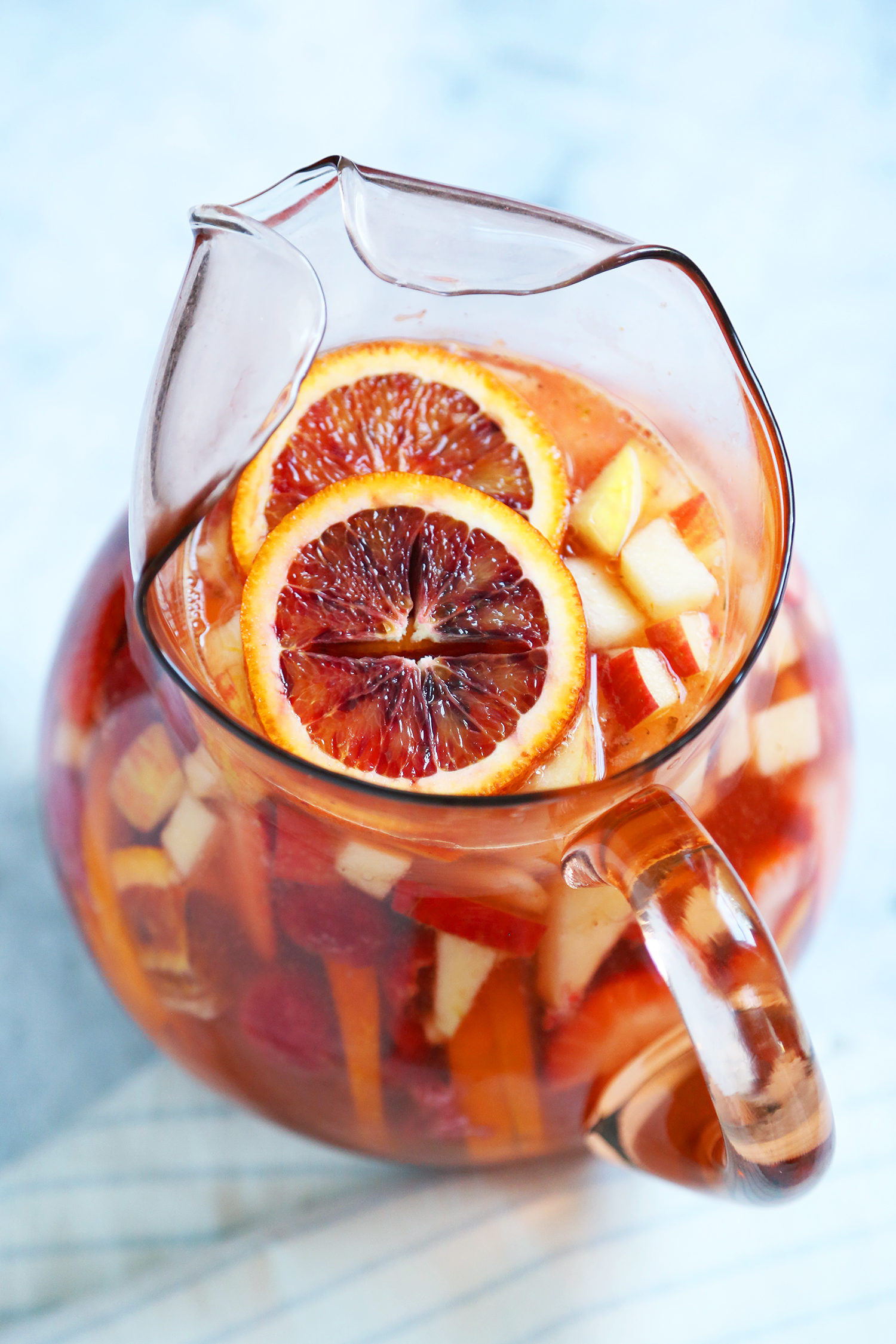 This sangria gets better as it sits, so you can make it ahead of time and store it in the fridge. It serves 4-6 people or just you all weekend. 😉 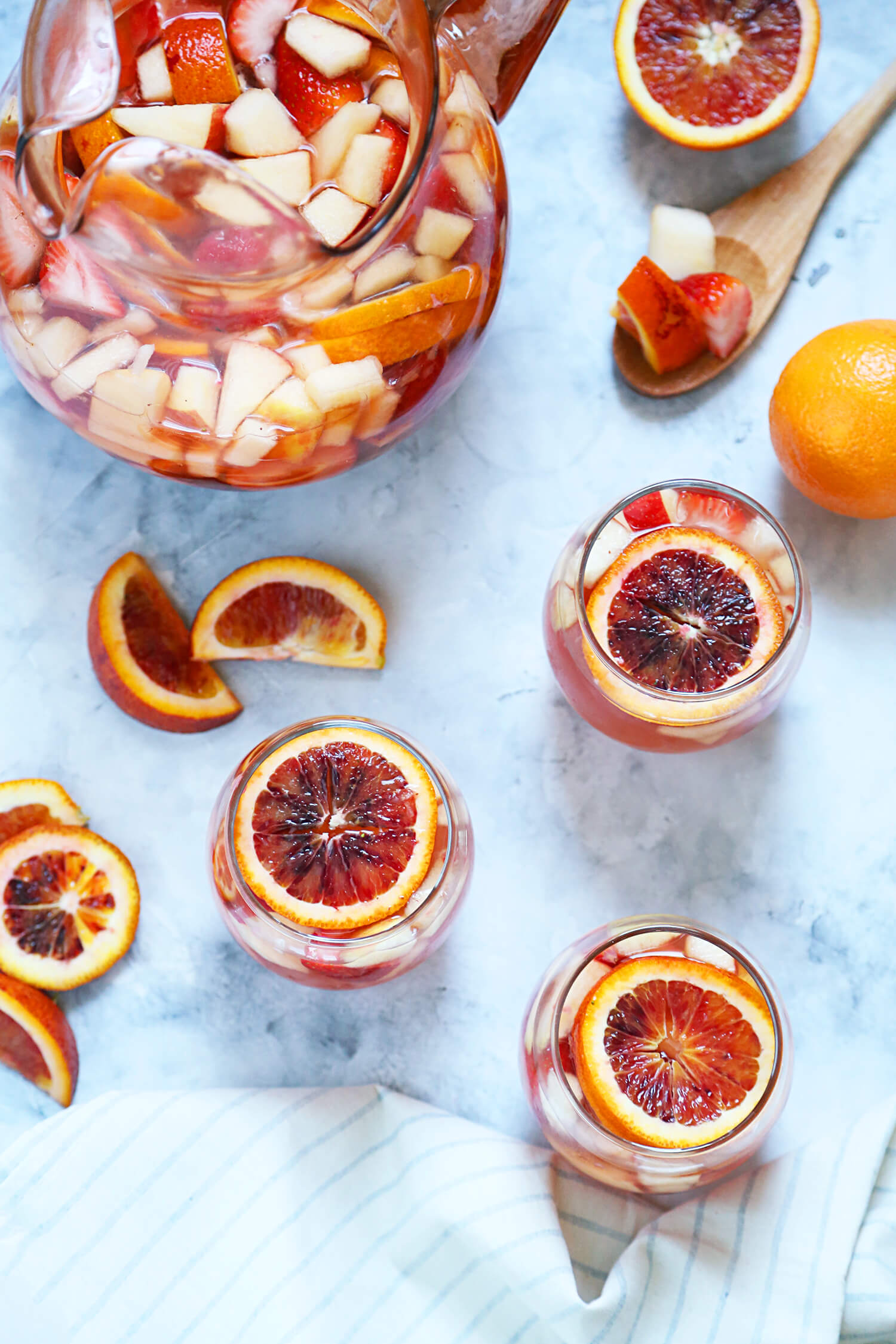 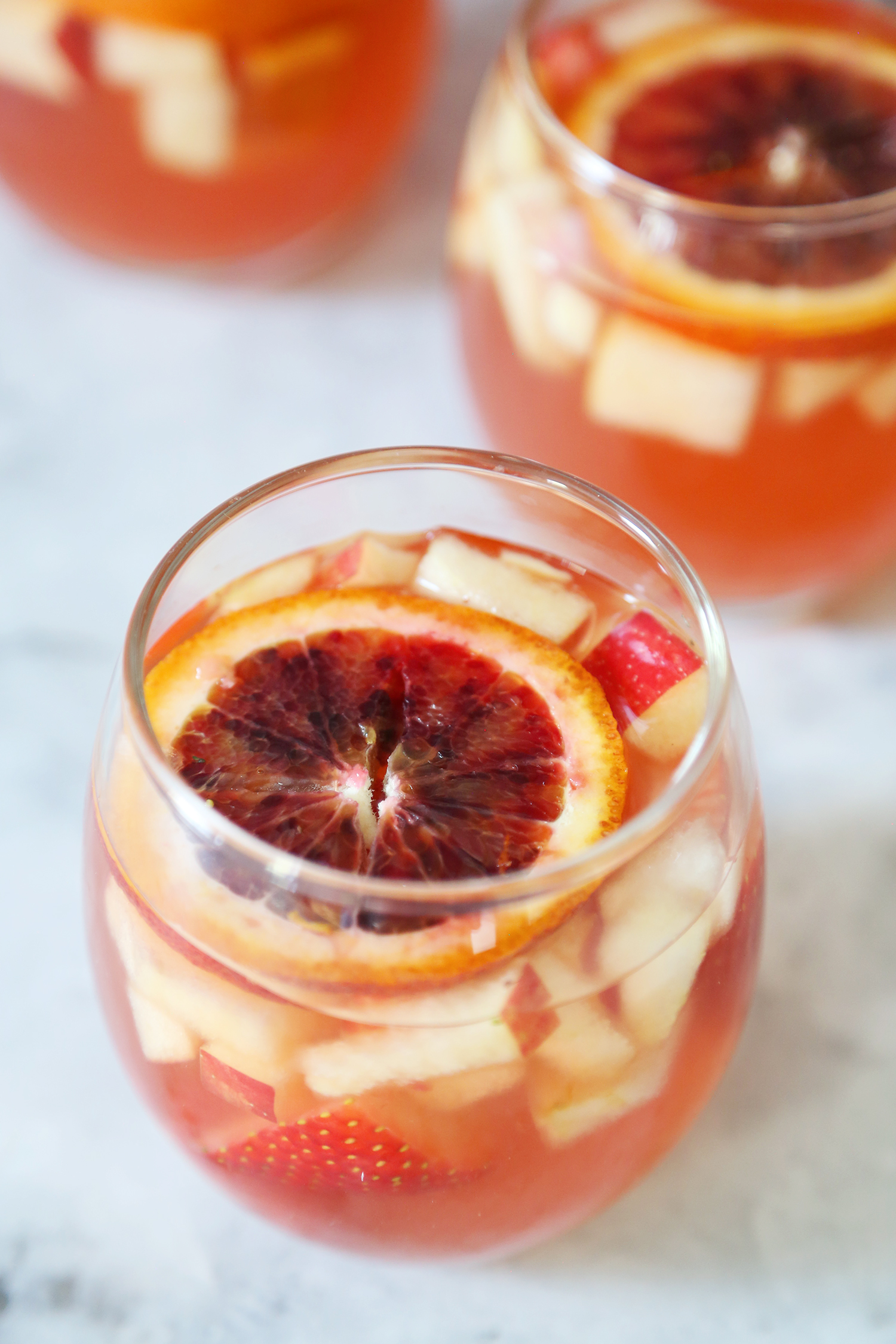 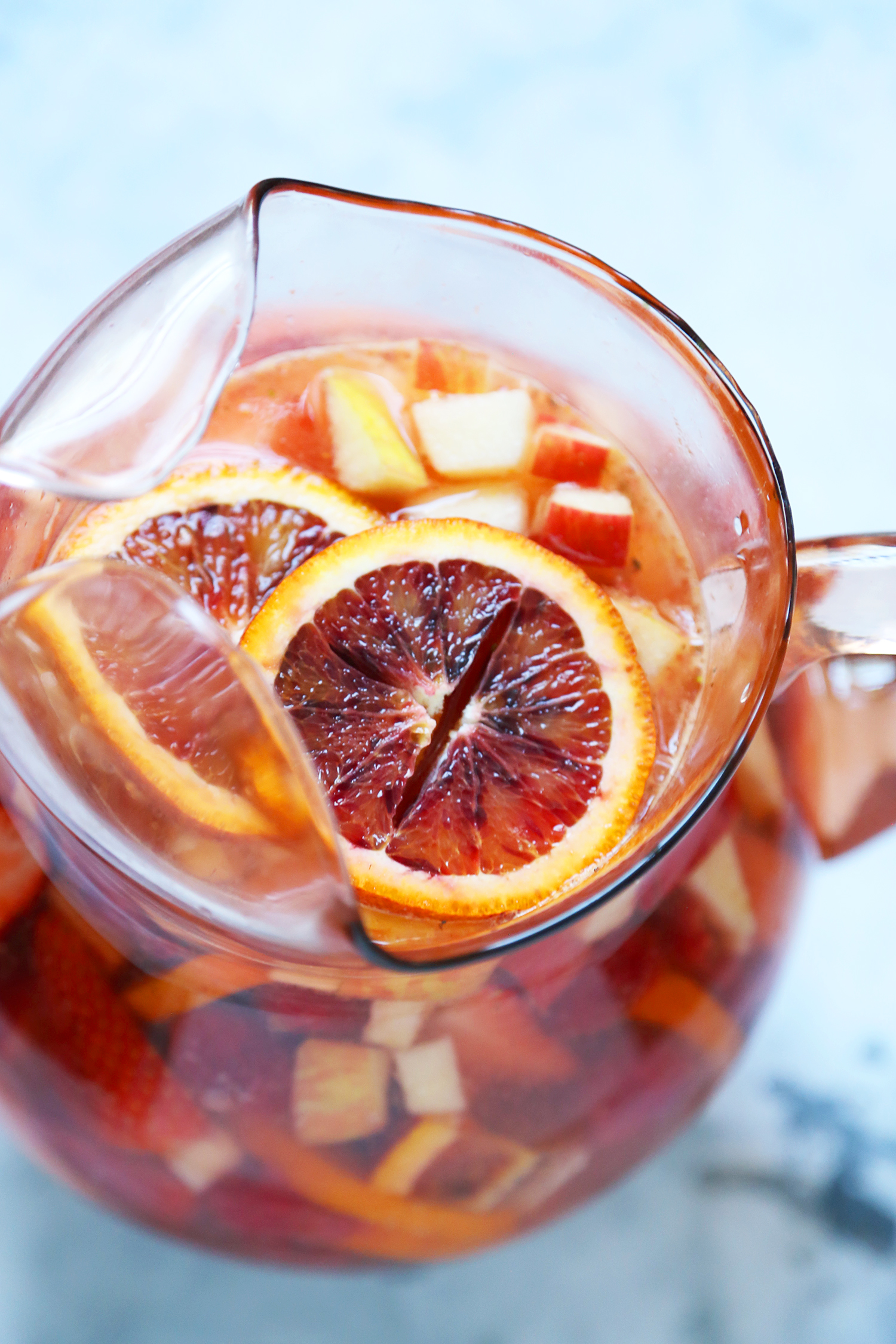 I added the Campari as a last minute idea but I’m so glad I did.  Campari is an Italian bitter aperitif and is a blend of fruit, herbs, and spices. Its prominent flavor is strong bitter orange so I thought it was a great ingredient to use in the addition of fresh blood oranges. I wanted to use a Brandy that added some seasonality and thought using Lairds Apple Brandy was the perfect option. Its fresh apple taste complements the other ingredients in this Blood Orange Sangria plus enhances the flavors of the freshly chopped apples. I used a Honeycrisp apple because those are my favorite. Their creamy white flesh is exceptionally crisp and aromatic and they have a pleasant sweet-tart flavor. 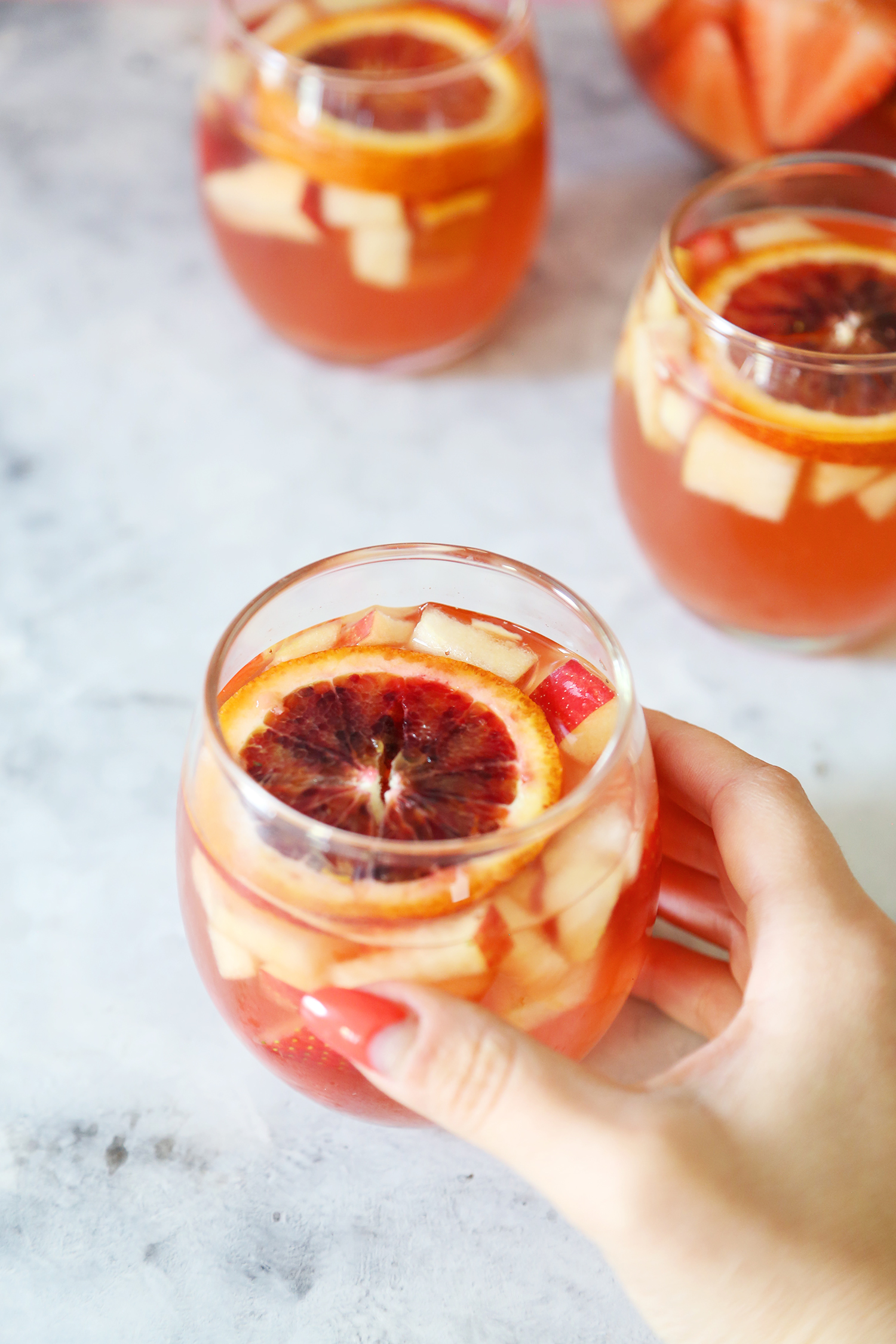 I hope you enjoy your weekend. Are you doing anything fun? I’m excited to finish decorating for Christmas and to work on some new holiday posts. Oh, and I’ll be drinking this Blood Orange Sangria. Let me know if you will be too in the comments below. xo 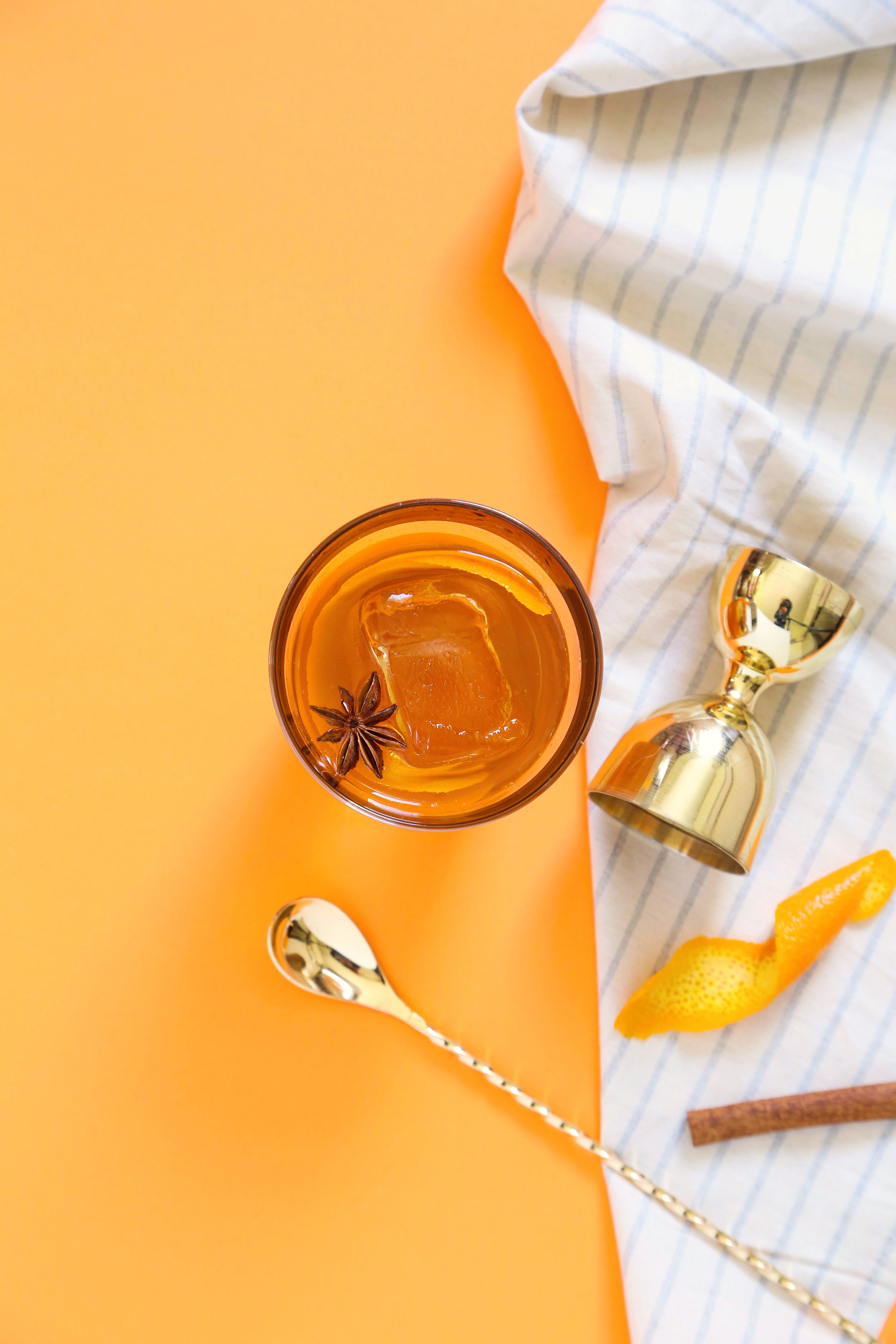 I couldn’t have planned this post any better because today it finally feels like Fall. The windows are open, there’s a beautiful breeze coming in and it’s a most wonderful 66 degrees out there. Time for an old fashioned, right? 😉 I had an idea to make a Fall spiced syrup that you can use a number of ways all throughout the cold months. My favorite way to use it is in an old fashioned, but you can use it in a daiquiri, a fix, or even your coffee. Use it in any cocktail that calls for simple syrup by merely swapping it out and making your drinks a little more Fall appropriate….

END_OF_DOCUMENT_TOKEN_TO_BE_REPLACED

New Years is upon us. Time is flying and I’ve been so busy with work I can barely keep up. I woke up early today to shoot, just got done editing, and now I’m writing this blog post before heading in for my shift tonight. Oh and I picked up tomorrow night (NYE) which I am regretting already. I can’t say no to the money and I’m a workaholic. My resolution for 2017 is to definitely be better at time management and concentrate on consulting and the blog. I can’t keep having 4 jobs at a time anymore, I’m always burning the candle at both ends, and when I finally get a break I spend it recuperating and not enjoying the things that make life worthwhile. I’m not trying to be negative but I have been reflecting these past few days after Christmas and right before the beginning of the new year, which I’m sure a lot of you have been doing as well. What are you most looking forward to in the New Year? What kind of improvements will you be concentrating on in your life? 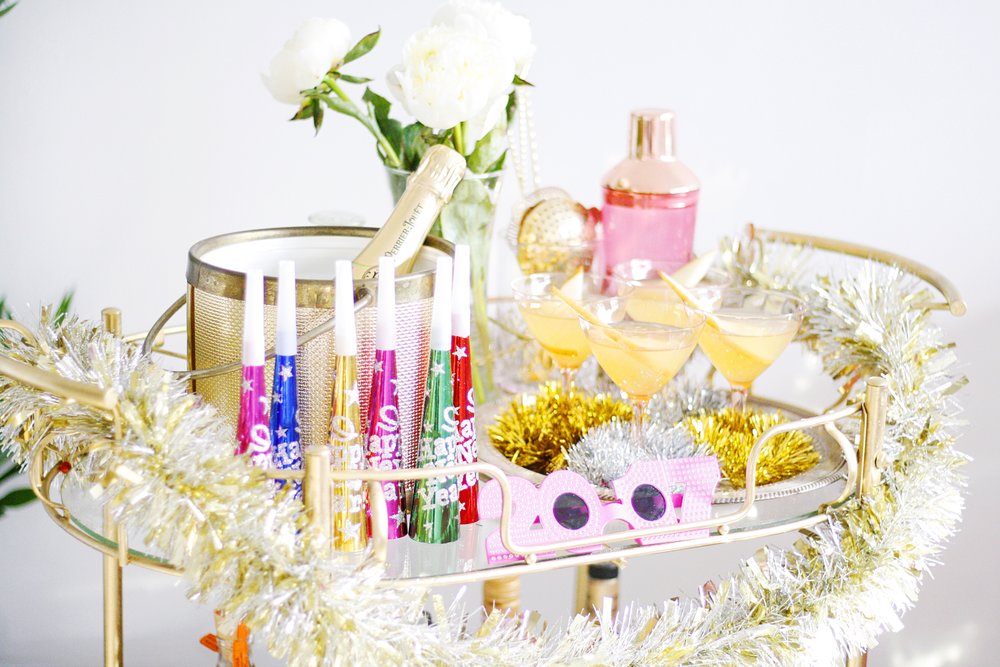 Lets get down to business which is DRINKS!

I wanted to make something topped with bubbly because it only seems appropriate. You have to drink Champagne on NYE! This is a little riff on a French 75 and is perfect for your New Years Eve gatherings. You can batch this, and just top with sparkling to serve, put it in a punch bowl, or make to order if there are just a few of you. The Calvados and Poire Williams combine magnificently to bring you something thats fruity yet winter appropriate with some citrus and a fizz!

I found these little tinsel coasters that slip onto the foot of your glass at a thrift store! Perfect find for holiday parties!

Combine all ingredients except Champagne into a tin, shake with ice, strain into a flute or coupe, and top with Champagne.

It’s been a really hard year for me with the passing of my father and that put a lot of things into perspective for me. Life is short and it’s flying by. I want everything I do to be more meaningful. I want to have the life I’ve always dreamed of because I work really hard and I deserve it.

On the other hand this year has also been very positive for me. I have accomplished a lot, and I’ve worked really hard and I am proud of myself. I started the blog and although I have a long way to go with growing it, it has only been 6 months and I’m really happy with where it has gone in such little time. I want to thank all of you who take time out of your day to read my posts, like my photos, and give me supportive feedback. Sometimes it’s really hard to want to put forth the effort to do this when people are being negative or when you’ve had a really long week at work and just want to stay in bed. It is another full time job (that I love), but it is a lot of work and I appreciate every kind word that is sent my way.

There is a lot to be excited about in the New Year and I can’t wait to get there! Have a wonderful NYE and I will see you in 2017!

There is no better way to celebrate your Fourth of July weekend than by drinking and mixing with American Spirits. One of my favorites has always been Lairds Applejack.

The Lairds have been producing Apple Brandy in Monmouth County, New Jersey for almost 300 years, passing down their recipe from generation to generation. They are the oldest commercial and family owned distillery in the country holding license number 1. In fact, historical records show that in 1760 or before, General George Washington wrote to the Laird family requesting their recipe for producing Applejack, which the Laird family supplied. George Washington is the only other known person besides the Laird family to have the recipe. Abraham Lincoln also served Applejack in his New Salem, Illinois tavern. It doesn’t get more American than that.

Apple Brandy fell out of popularity somewhere in the mid century, only being a favorite of old timers sipping on it at their local watering holes. This all changed with the craft cocktail boom of the early 2000s which ushered in a renaissance of enjoying classic cocktails like the Jack Rose again. Suddenly a rather obscure spirit became a cocktail bar staple with a cult following. Nowadays you’re lucky to get your hands on a bottle of it, as bars all across the country struggle to keep it in stock. Laird & Company has been the sole producer of this spirit category since the end of prohibition with only recently some small craft distilleries releasing their own version of apple brandy.

In 2013 I was lucky enough to visit the distillery, which you can read all about here in my article that was featured in Edible Magazine. I have always placed this spirit on all the menus I have put together because of its importance, as well as included it on the menus of establishments I have worked at over the years. In 2011 my recipe for the Hamilton Park Swizzle was in the Summer of Tiki issue of Imbibe Magazine. It was also on the menu at Lani Kai, a now shuddered modern tropical bar owned by Julie Reiner in the Soho section of Manhattan. 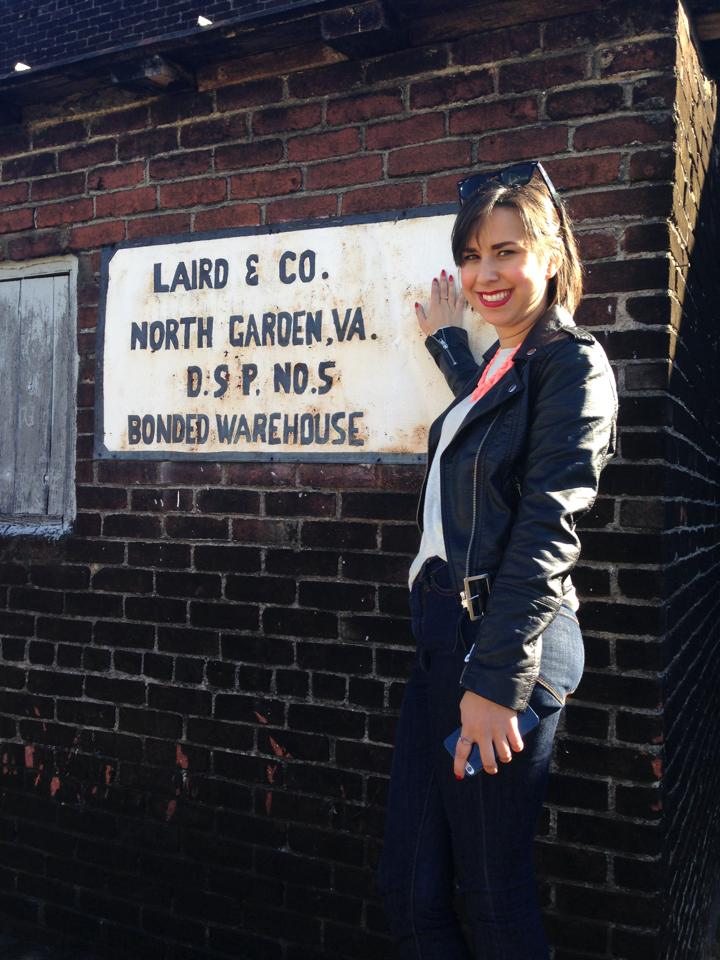 Since then it has always been my project to create variations on the Queens Park Swizzle cocktail and name them after parks in Jersey City, NJ where I am from and still reside. I have also created the Van Vorst Park, the Lincoln Park, and now in honor of the holiday weekend that is upon us I have put together the Liberty State Park Swizzle. For those of us that will be spending the fourth there watching the fireworks in the shadows of the Statue of Liberty herself, this is what you should be drinking.

I used Lairds newest product, Jersey Lightning, a clear, un-aged apple distillate. It is boldly flavored with super crisp and fresh apple notes, a moonshine-esque liquid that’s a wonderful candidate for mixing in drinks. It’s also 100 proof. You were warned. 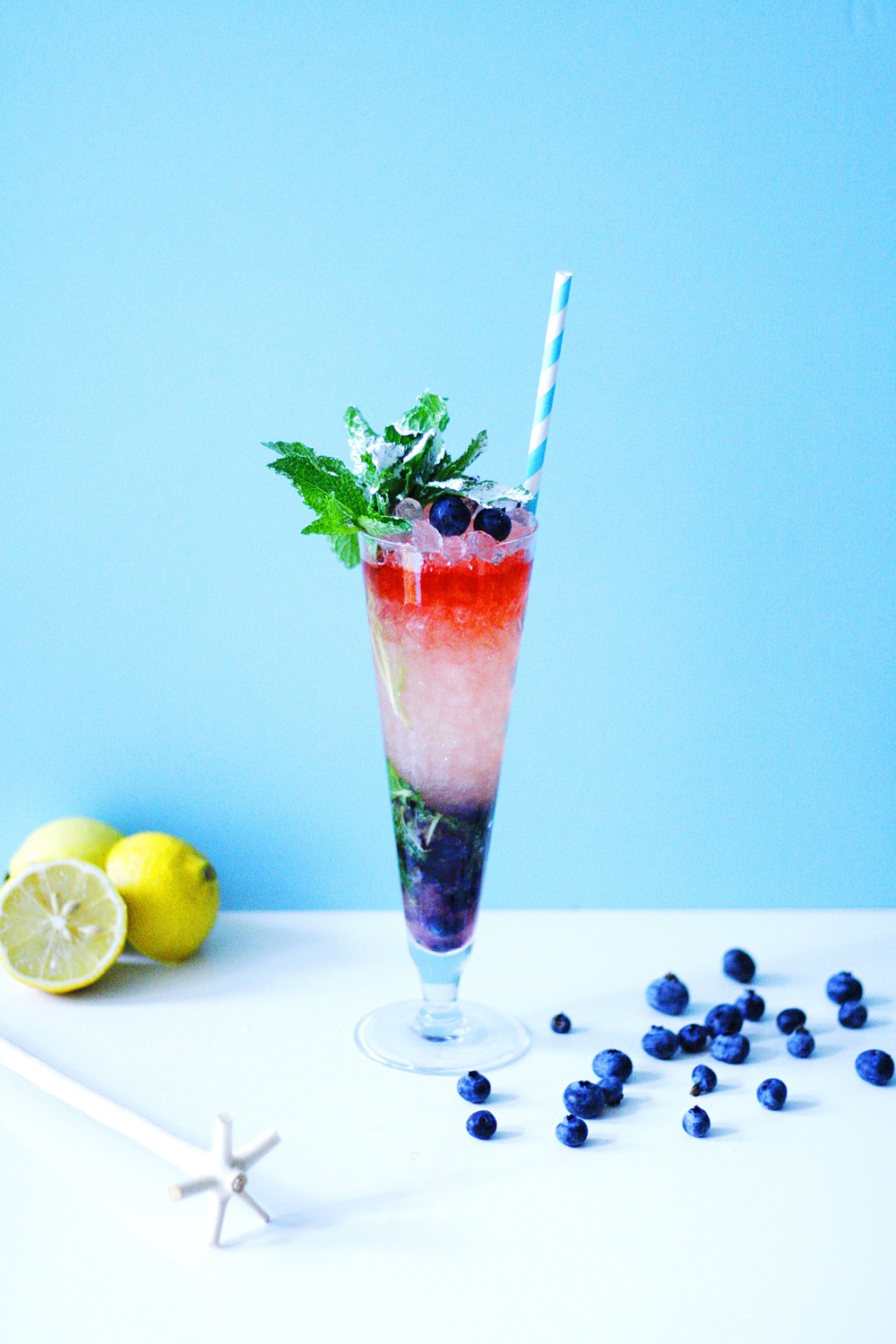 In your serving vessel put your handful of mint and blueberries. In your mixing tin add all your ingredients except the Campari, dry shake, and pour a splash in your serving vessel. Muddle the mint and blueberries, add ice, and pour the remainder of your cocktail into the glass, float Campari. Garnish with a lavish bouquet of mint, blueberries, and dusting of powdered sugar. I love powdered sugar! 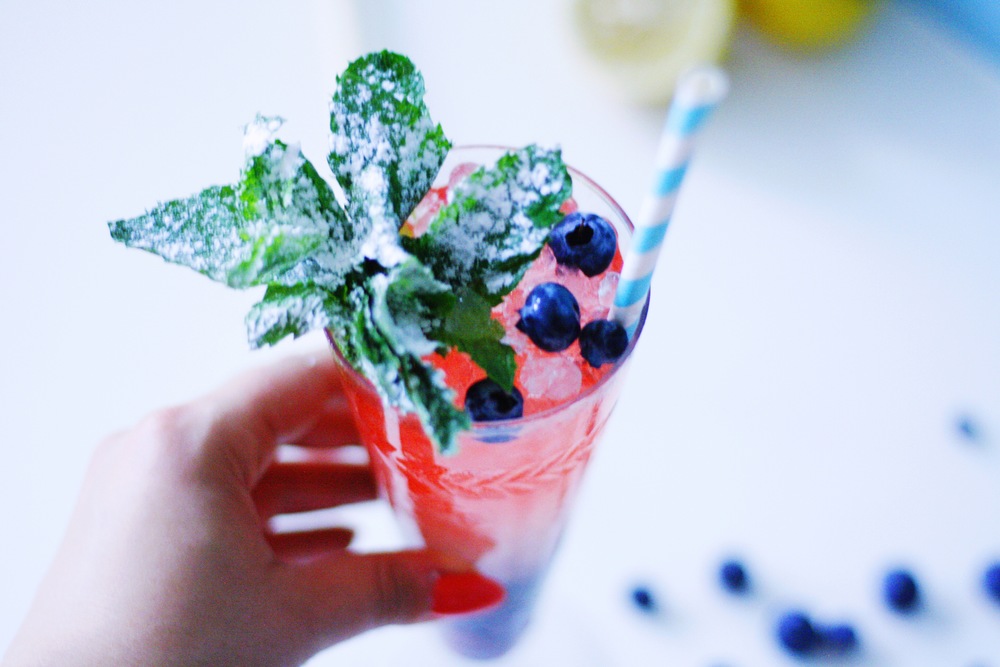 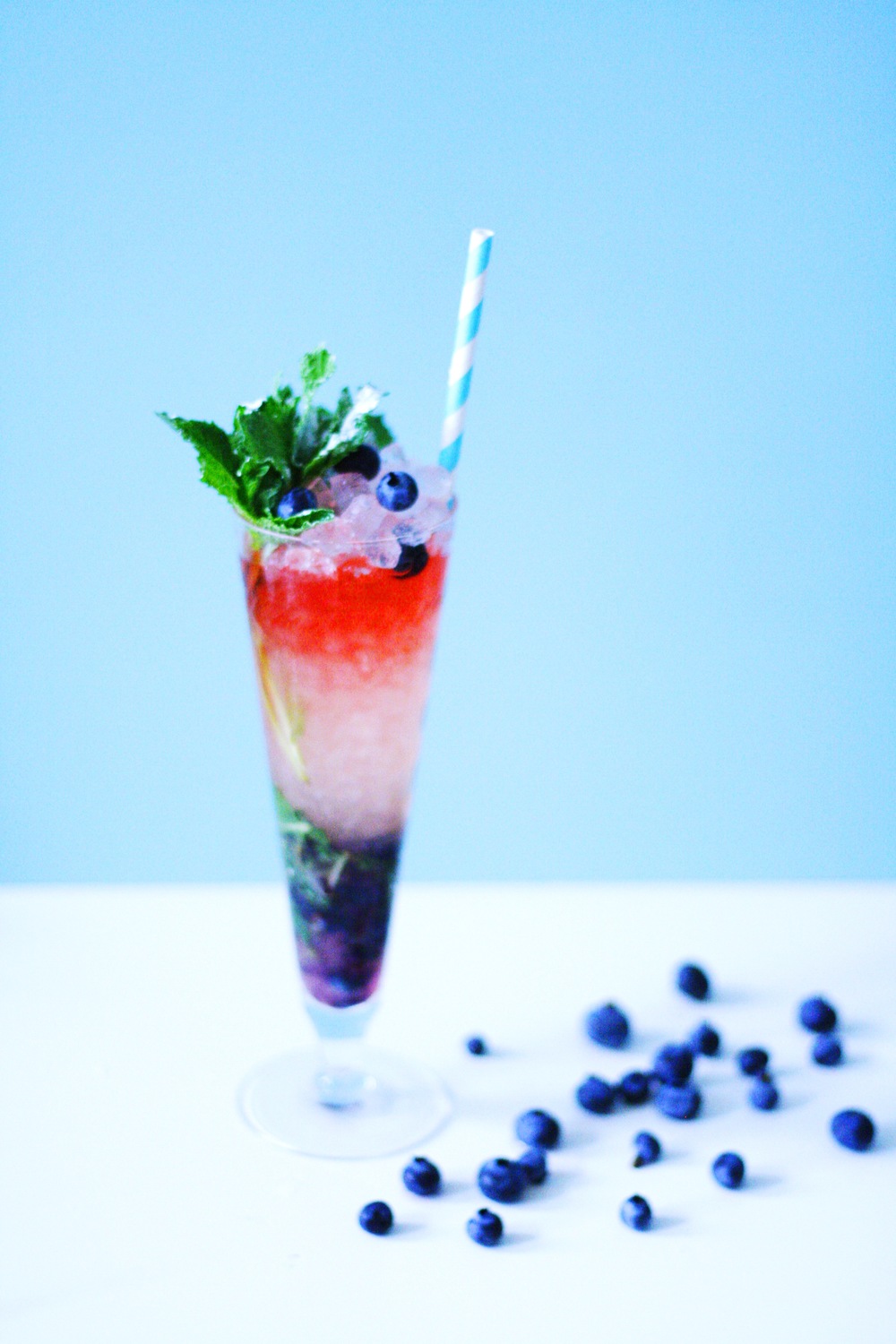