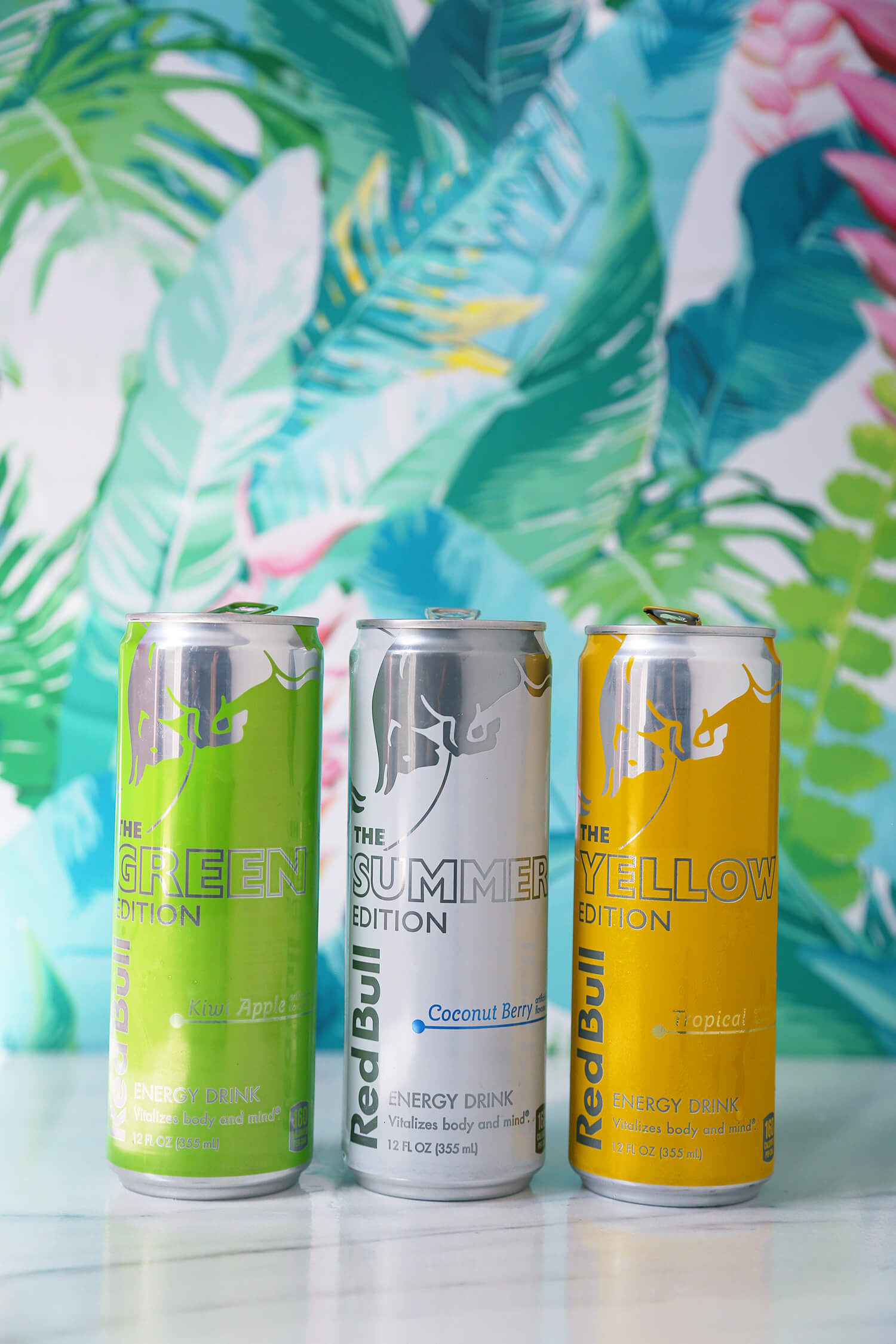 Recently I teamed up with Red Bull to make some Summer mocktails to celebrate the release of their Red Bull Summer Edition Coconut Berry. The Coconut Berry might be my favorite flavor yet but I’ve also put together mocktails using Red Bull Green Editon and the Yellow Edition (my other two favorite flavors). The Green Edition tastes like kiwi and apples and the Yellow Edition tastes like a mix of tropical fruits with passionfruit shining through the most.

I was pleasantly surprised at how easy Red Bull was to mix with. These flavors are fruity and absolutely perfect for topping off your drinks with for Summer. Because who doesn’t love a little energy boost in their drinks? I certainly need all the energy I can get! I loved how these mocktails turned out which is why I decided to share them with you here. 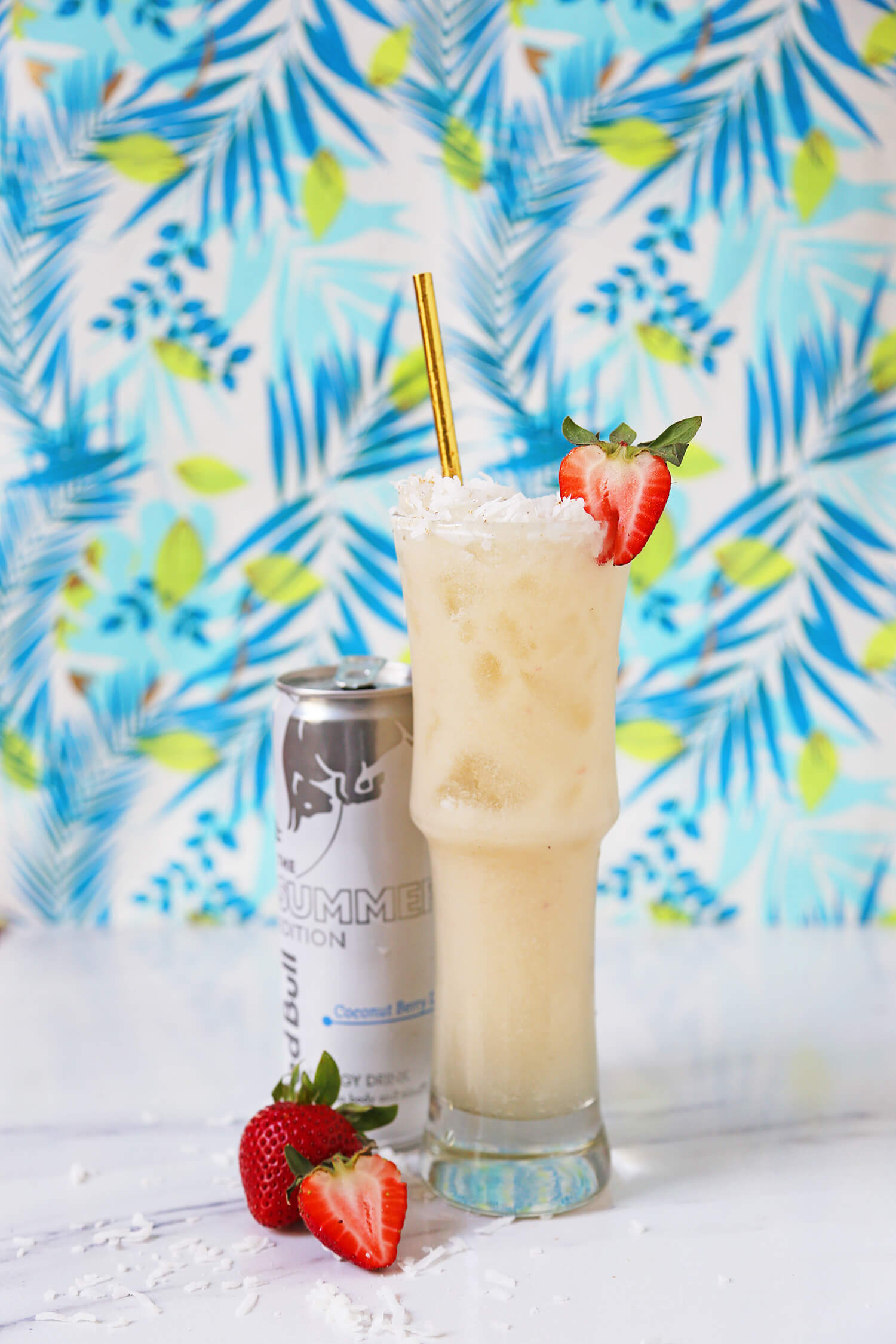 In Love with the Coco, makes 1 serving 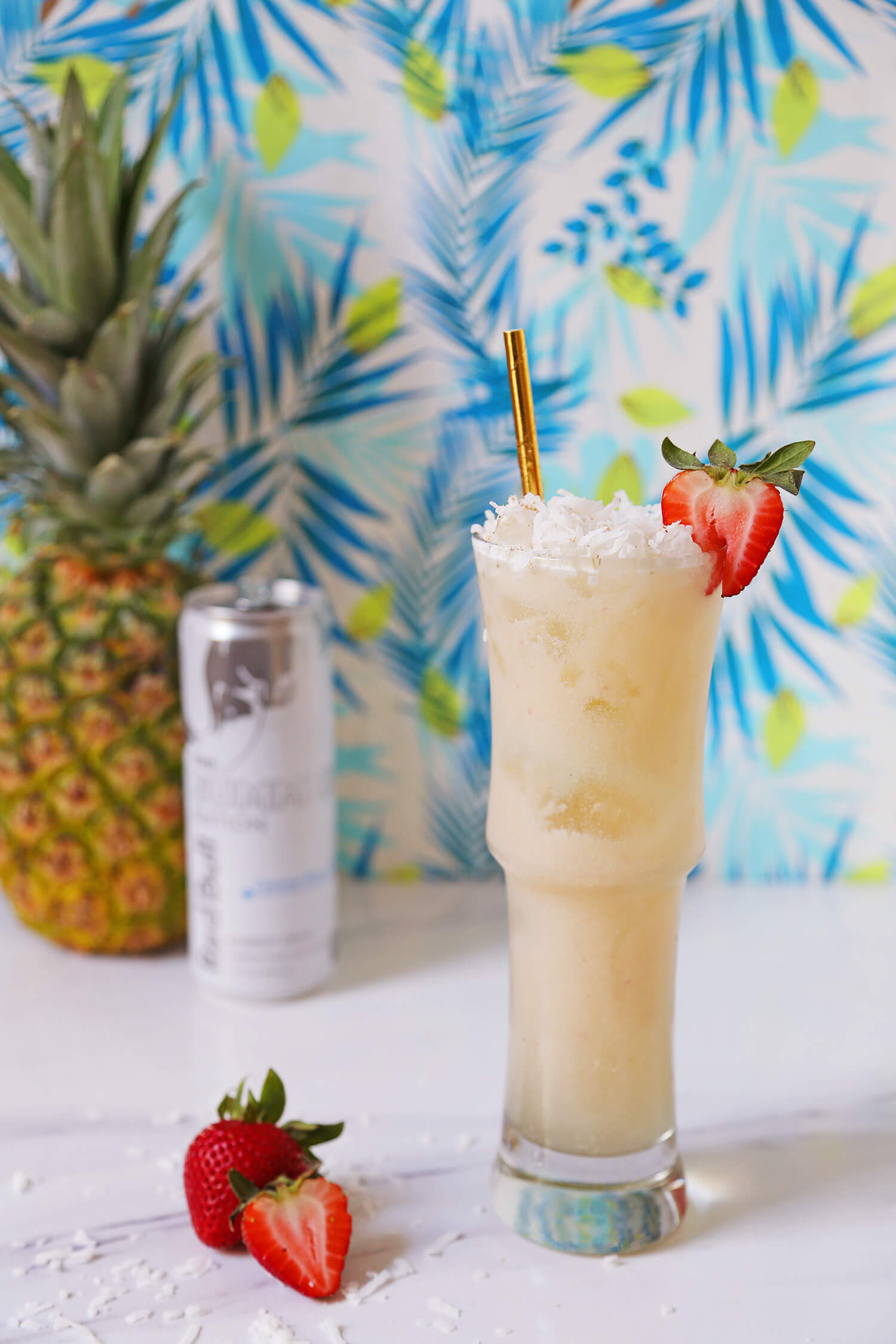 First add pineapple, orange, and strawberries to a cocktail shaker and muddle. Next, add coconut milk and then shake with ice and pour into your serving vessel over ice. Finally, top with Red Bull Coconut Berry. Garnish with coconut flakes, freshly grated nutmeg, and a strawberry wedge. 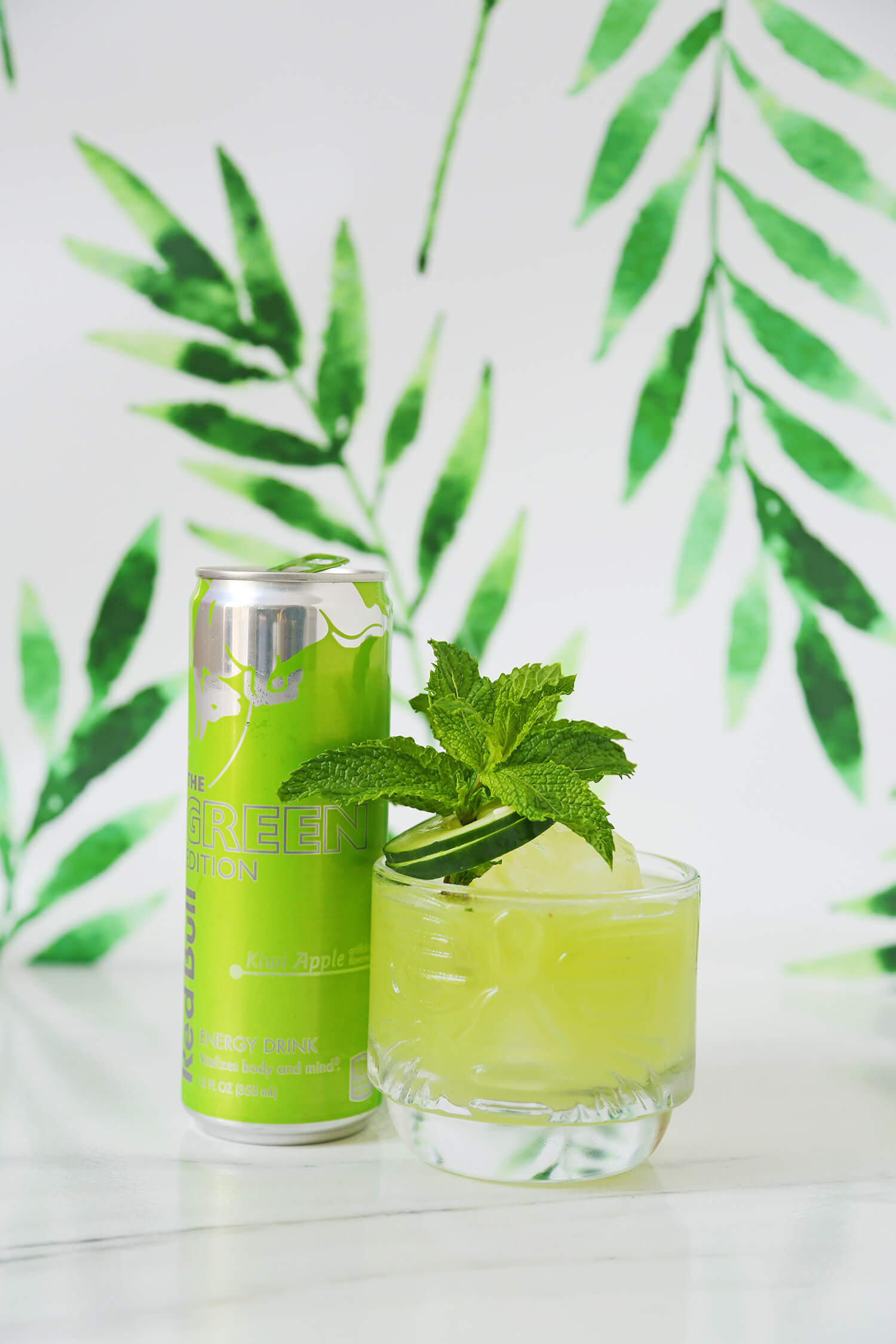 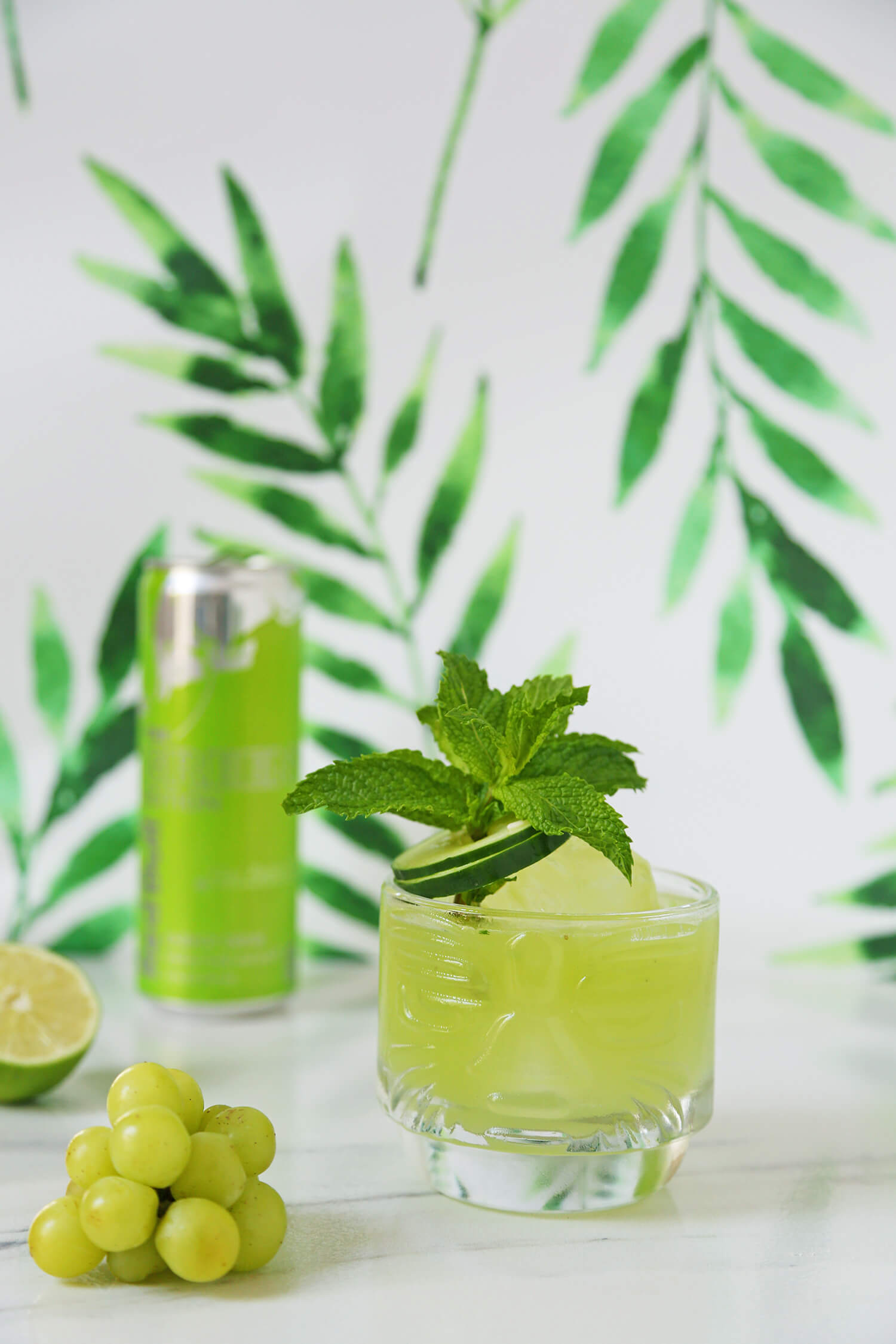 First add lime and cucumber juice to a cocktail shaker with a handful of mint, 5 green grapes, and 2 apple slices. Next, muddle and then add ice and shake. Strain into your serving vessel over ice and top with Red Bull Green Edition and a splash of Red Bull Lime Edition. Garnish with 2 cucumber slices and a mint sprig. 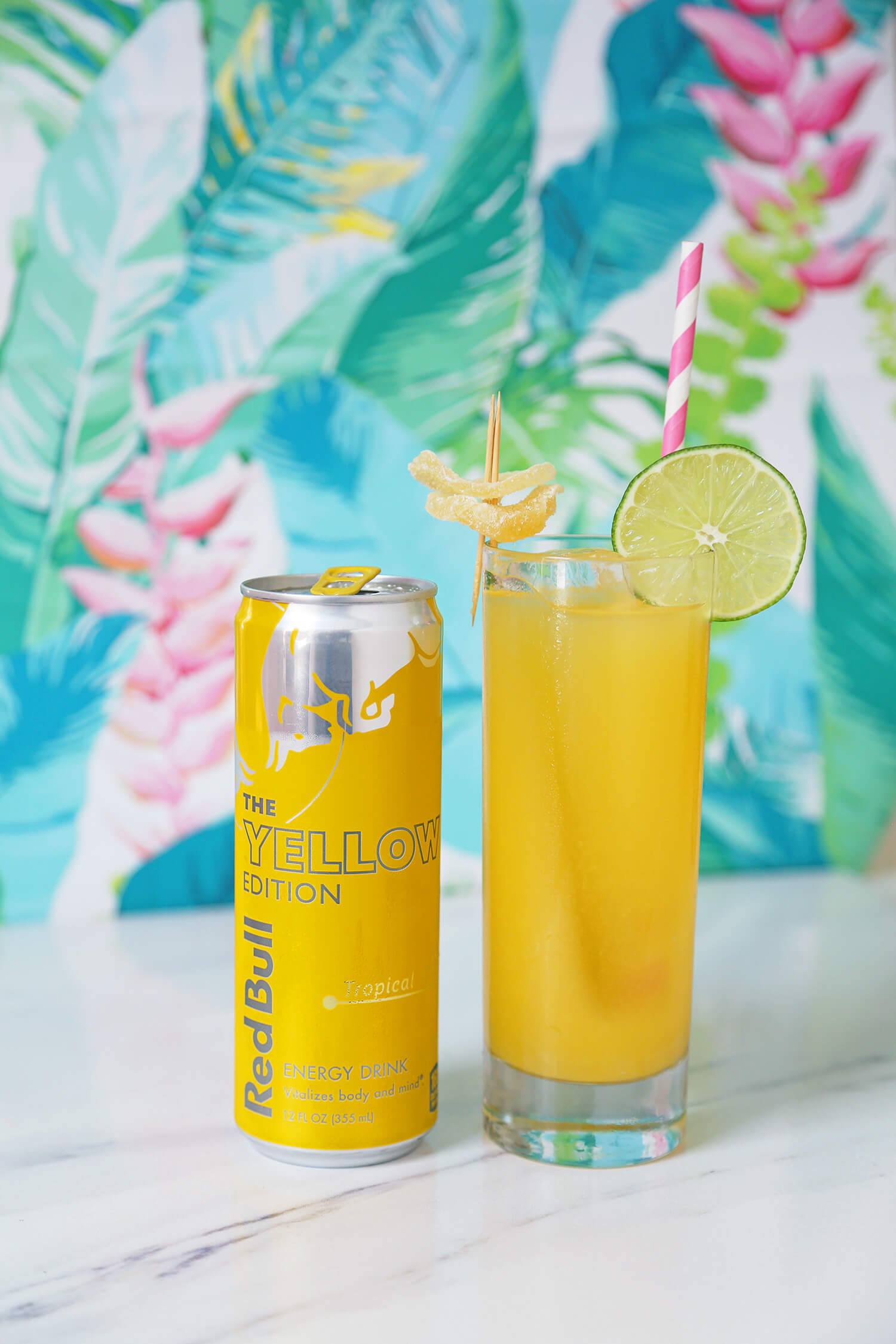 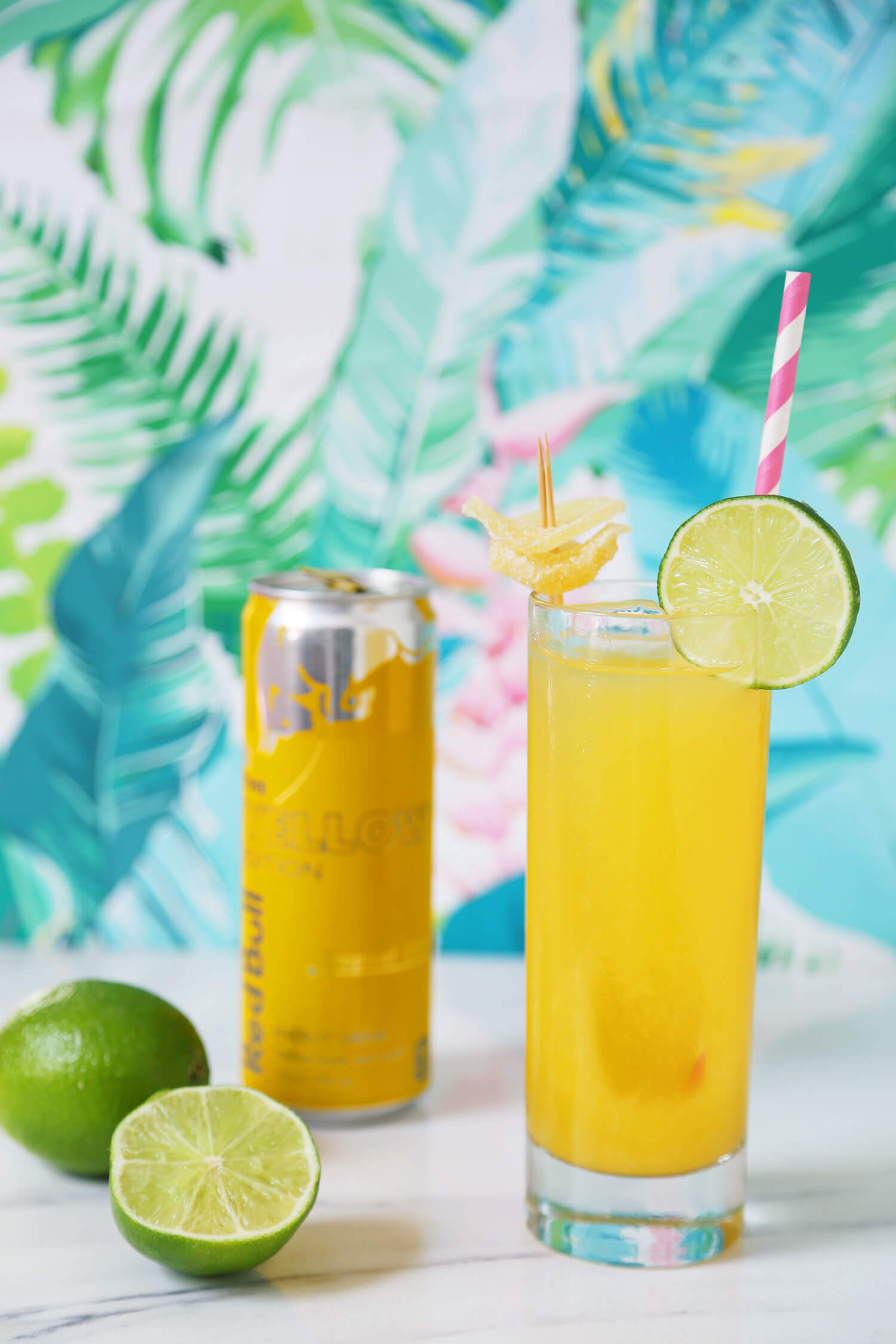 First add lime, ginger, and mango to a cocktail shaker and muddle. Next, add ice, shake, and then strain into your serving vessel over ice. Top with Red Bull Yellow Edition and a splash of club soda. Garnish with a lime wheel and ginger candy. 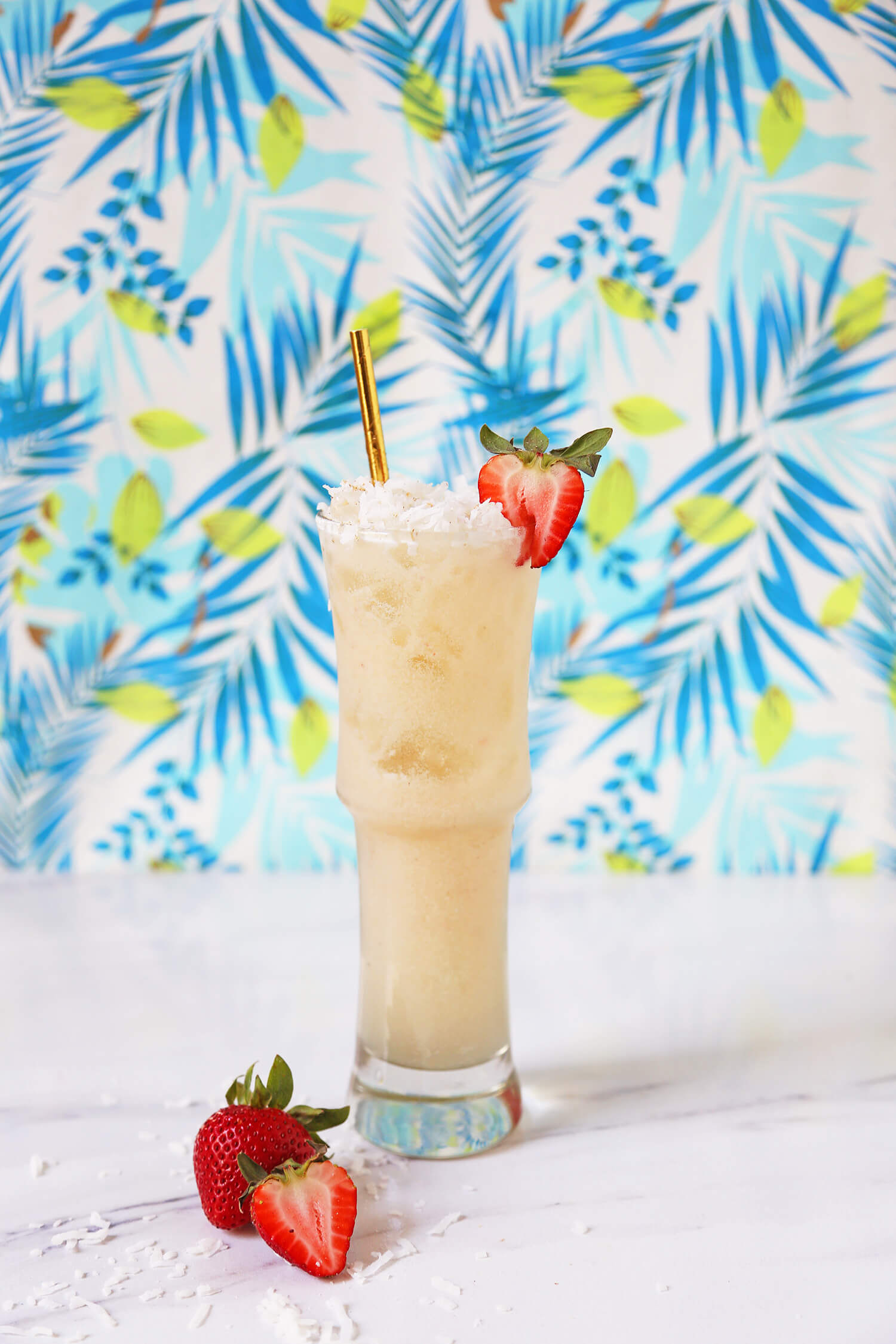 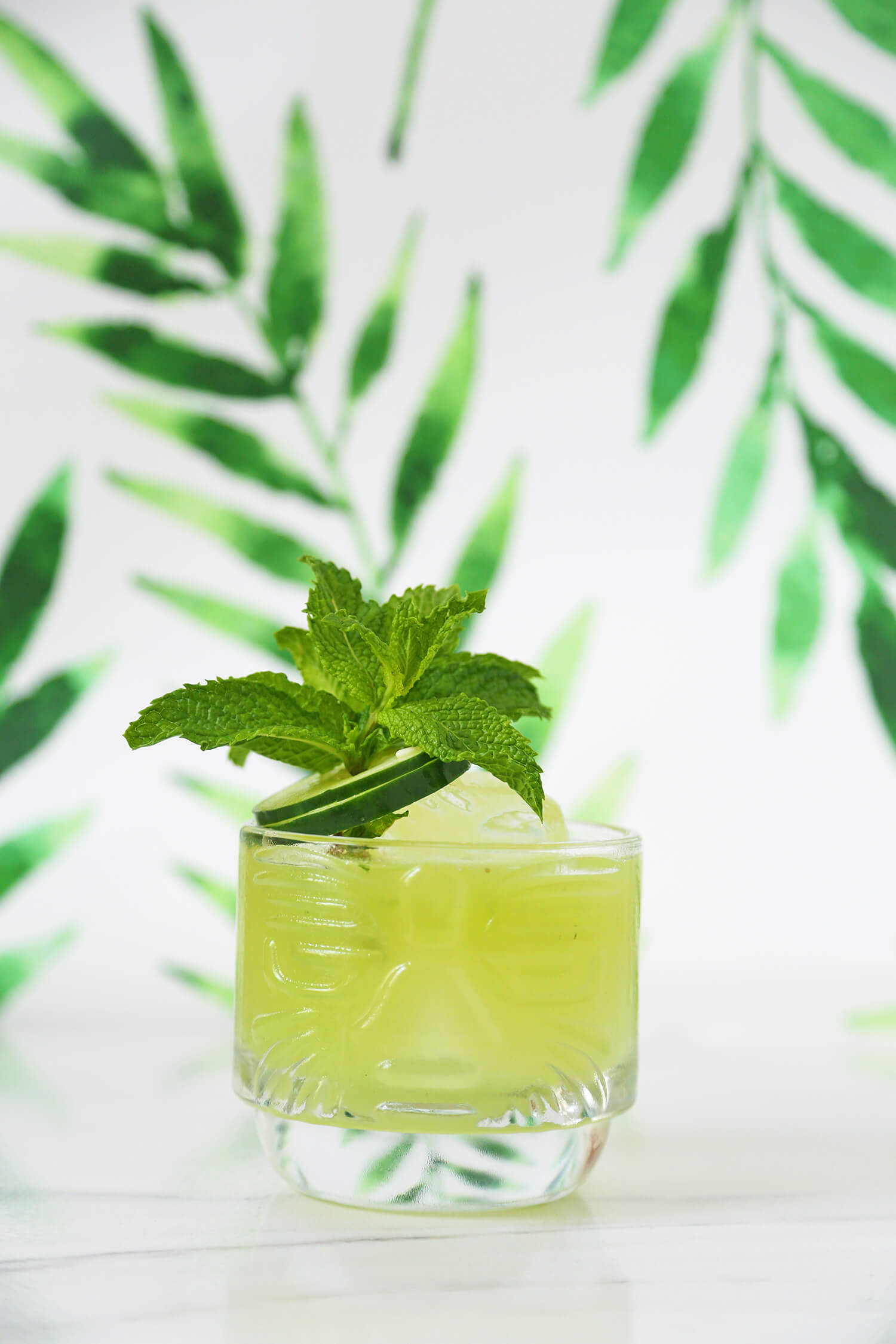 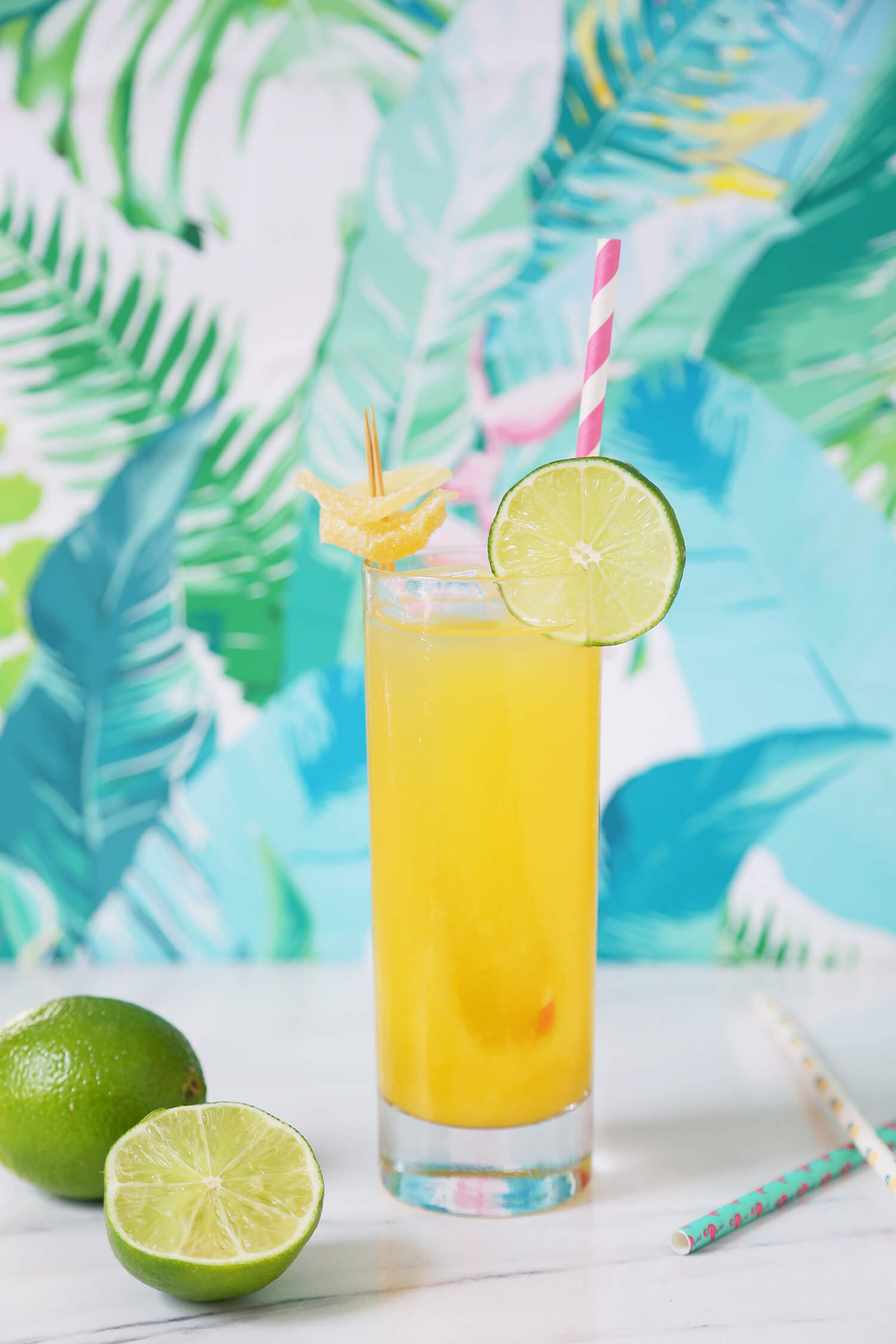 With the end of Summer just a month away I had an itch to make a frozen drink. What’s more fun than a frozen drink? Drinking one out of fruit, right? I have drunk many piña coladas out of a pineapple and was trying to brainstorm what other fruits I could possibly turn into a serving vessel. Watermelon has had its fair share of the spotlight this summer with being the perfect addition and vessel for frosé. While I was perusing the produce at my local market last week I spotted a cantaloupe and I knew this fruit was THE ONE. When perfectly ripe it is juicy, sweet and has a floral aroma which sounds perfect to pair with rum. My mind went directly to the daiquiri which is a classic and simple drink but can be completely transformed with the addition of some fresh fruit. So I present to you a Frozen Cantaloupe Daiquiri!

Cut your cantaloupe evenly into two and scoop out the seeds in center. Carefully scoop out the insides of the fruit and reserve the shells as your serving vessels. You can freeze the shells and the fruit beforehand. Using frozen fruit in drinks or smoothie bowls yields a better and more slushy consistency.

Add all your ingredients to your blender pitcher and blend with a cup of ice. Pour into a cantaloupe shell and garnish with a mint spring and a slice of lime.

This Frozen Cantaloupe Daiquiri is super fruity, refreshing, and so simple to make. I used dark rum in this cocktail because I thought the flavors would mesh well with the richness of the demerara simple syrup and floral aromas of the cantaloupe. Frozen recipes sometimes need to be reworked because of how much water content they have. I like to cut the citrus in half and up the sugar to compensate for all the dilution. Using a richer sugar for your simple syrup, like demerara or cane, instead of plain white sugar also helps to combat an over diluted and tasteless frozen drink. I hope these tips help you next time you’re making frozen daiquiris at home. I’m super excited about how this frozen drink in a fruit cup turned out. I hope you try this recipe at home and if you do don’t forget to chime in on the comments below. Cheers everyone! xo