Well. I’ve been trying to write this post for months. Before and after making the move to Nashville.

You read that right.

I moved to Nashville.

If you’re following me along on IG then you already knew that. But before I start updating the blog again regularly I thought I would catch you up on what has been happening since December of last year.

I’m not sure where to start but to say that I had been trying to make the move to Nashville for around 3 years and the timing and situation just never seemed to line up. Even before moving into my old place I wanted to make that move and the decision was if I wasn’t making the move then I would have to find a place that would accommodate living and working and that I would be happy in. And so I stayed in Jersey City, NJ and made that apartment a home. Which you’ve seen quite a lot of from all of my One Room Challenge projects and home tours.

I was so emotionally invested in that home because I put so much time and effort into it that it pretty much took me an entire year to say goodbye to it. That mixed with trying to finish the book and everything else life was throwing at me. But after making a few more trips to Nashville over 2019, the last one being over Thanksgiving, I finally made my decision. I came home from that trip and I never unpacked my suitcase. I decorated for Christmas, I put George Jones on, and I applied for a home in Nashville, TN. My goal being that when I took the Christmas decorations down I would be packing them up along with everything else I owned.

I was approved and on New Year’s Eve 2019 I signed a lease for my first place in Nashville, TN. The greatest New Years gift I could have ever hoped for. Exactly one year after my partner left, one year after writing a book and publishing it and one whole year of finding my way back to myself.

I spent the next two months packing, planning and executing this move. After lots of trips to the Salvation Army, many Uhaul boxes, numerous mental breakdowns and two 13 hour drives later my things and I arrived in Nashville two days before my 33rd birthday. On my 1 week anniversary while I was celebrating with friends at Roberts Western World a tornado hit Nashville and its surrounding areas. Particularly devastating parts of East Nashville where I live. I felt very lucky to have a house to come back to after a 2-hour uber drive home through all the wreckage. That night I slept in my bedroom closet completely traumatized.

I spent the week after the tornado volunteering in East Nashville. Every day was different. Some days I was making sandwiches or packing lunches or taping up boxes or dropping off food to those in need. I couldn’t imagine unpacking the house I just moved into and was lucky to still have, while others just streets away had lost everything. So I earned that volunteer state nickname on my new Tennessee license.

A week after the tornado pretty much everything shut down due to Covid-19. All I can say is this isn’t the fresh start I was hoping for but here I am. I’ve spent the last two months unpacking, settling in and well, just living. It has been hard to think of anything else. And I’ve been wanting to write this post but so much has happened in such a short amount of time I just didn’t know where to start. I hope you’re all safe and I hope we can get back to normal life soon. But in the meantime, I thought I could get back to sharing some cocktail ideas and some home decor inspiration.

So I’m here to tell you that I’M BACK. xo Natalie

Super excited to announce that the book I’ve been working on since last year, Mod Cocktails, is now available for pre-order and is officially released on November 5th!

Thanks to everyone for their continued support while I wrote this book. Especially to my publisher Page Street. I worked really hard compiling recipes and stories of cocktails that I love and are important to me from the midcentury era. The recipes span anywhere from the 1940s to the late 1960s and also include my little spins on some of my favorite classic cocktails.

I tried to make this book accessible to everyone. That includes the at-home enthusiast and even more complicated recipes for the seasoned bartender. The objective of this book was to take two categories that are often separated, classic and tiki, and have a place for them to belong together while celebrating the midcentury. I hope you’ll invite these cocktails into your homes and bars.

I’ll be announcing the release party and book signings very soon. In the meantime, you can pre-order Mod Cocktails here on Amazon. xo

Whether I’m developing drinks for a menu or for the blog — one thing is for certain — I’m constantly inspired by vintage cocktail books. It’s been hard holding on to this new for months but I’m so excited to announce that I’ve been working on a cocktail book!

I’m not giving away all the juicy details yet but it will be a compilation of my favorite mid-century classics and some of my own originals.

I can’t thank Page Street Publishing and Macmillan enough for believing in me and allowing me to make one of my biggest dreams come true.

Thank you for all of your continued support. 2019 will most definitely be my year! Coming July 2019! xo

I’m beyond excited to announce to you all that I am a finalist in the 8th Annual SAVEUR Blog Awards! From a pool of 30,000 submissions, my blog was selected as a top six contender in the Best Drinks Coverage category. I’ve known for about a week now and had to keep it a secret which was really hard! Obviously, I wanted to tell everyone! A BIG thank you to everyone that took the time to nominate me, I can’t tell you how much it means.

When I started on this journey about 14 months ago I wasn’t really sure where I was going. I knew that I had a wealth of knowledge learned over many years of being a professional bartender, and I wanted to use that to help educate others in a fun and inspiring way. I needed to start somewhere, so I just did and I haven’t stopped since. I have been recipe developing and consulting on menus for years but bringing those skills to an online platform has helped me expand in many ways I hadn’t ever imagined. Although the hustle is real sometimes, I get to do many things that I truly love on an everyday basis and I am very thankful for that. I also get to connect with others that share the same passions and interests as myself and that keeps me very inspired and motivated. The love and support from the blogging/Instagram community is unlike anything I have ever experienced. What would I do without all of you?

For those of you that have taken the time to support me, I hope that I can one day raise a glass with you or return the favor. There are so many things I want to accomplish from here, like writing a book, launching a line of bar tools, and opening my own bar someday. I know that every day I’m working towards those dreams.

Today voting goes live and I still need your help to win. From 8/9-9/6 you can vote for me as often as you’d like. Each category will have two winners. The finalist with the most votes will be named Readers’ Choice winner and a team of SAVEUR editors will also select an equally weighted Editors’ Choice winner. Winners will be announced on 10/2 in Charleston, South Carolina and online. Being in the top six next to so many other talented bloggers is truly an honor, especially because I’ve been doing it for such a short period of time. Thank you for this chance and I promise to keep creating the content and cocktails that you love here on Arsenic-Lace.

You can vote for me here! I apologize in advance for posting about voting for me every day for the next month. 😉

Cheers everyone! It’s hump day so don’t forget to make yourself a cocktail! xo 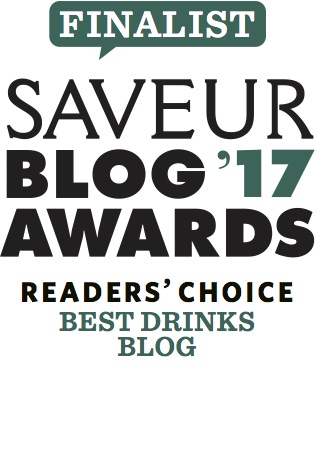